Diana is one of the oldest OCs I have, who was originally a background character, HOWEVER fate decided that I'd become obsessed with her to the point that she got more lore (and by proxy, got into more traumatizing scenarios) then the character I made that was actually planned to be the main character. And eventually, she became my favorite OC. From background character to extremely traumatized main character. Additionally, her lore is an absolute mess and I'd probably have to make a whole google document on it. She just wants friends but instead she gets put through basically hell. Cove may seem a little scary at first, having sharp teeth and looking like a shark, but they're actually the opposite. My friends quite like Cove. That's an understatement actually, my friends love Cove. She's just a baby who doesn't know what shoes are, what swearing is, or what gender is. Actually, because he doesn't know what gender is, they just have all the gender. Her backstory is a little dark compared to his cute design and personality, however these brief descriptions aren't totally meant to explain backstories, so I'm not gonna go into their backstory! 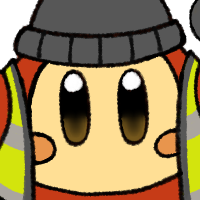 Bus Driver Dee actually came to be from a discussion between me and a friend. The discussion started out with joking about how Morpho Knight didn't know what glass was, and it quickly progressed to me joking about Morpho Knight smashing the door of a bus in because it got frustrated that it couldn't go through the glass door. Which then progressed to Morpho Knight going into debt because it now has to pay for the bills of destroying the door of the bus. And now it has to work at the Halberd. While this was happening, I suggested Bus Driver Dee's existence. And then I made him. That's it. That's the reason why Bus Driver Dee exists. And you know what? I don't regret it at all. Lithium is a bit of an odd case, as he originates from an undertale AU that I attempted to start and promptly gave up on because I got some of the character designs done, and then realized I couldn't draw skeletons. So that completely haulted it, and I dumped the idea. But I thought Lithium was nice, so I kind of just kept him. He's supposed to be kind of like a surfer dude, and his shop was supposed to be more themed around items you'd find at a shop near a beach, or something along those lines. But since the idea never flourished, the shop never really happened. I'll probably try and do something with him eventually, but for now I'm not totally sure.